The other day I published a piece about a couple of topics near and dear to my heart in Eve lately, and one of those topics mentioned a certain development style that has taken CCP by storm in the last year or so: Delete Key Game Development. It is the removal of features or functionality in the game client in an attempt to fix issues or improve the experience.


Industry teams not working the way they were envisioned? Remove them, stating the possibility to revisit and fix them properly later. Clone costs too high for nullsec/WH veterans to justify flying cheap ships? Get rid of them. Bombers able to probe and warp to targets too quickly? Remove a bunch of fleet warp mechanics!

I know I come off as if this is a terrible way to do things, and in some cases it can be. Present issues aside, however, deletion of some game functionality could have a positive effect.

While still a lowsec resident, I'm no longer a part of Factional Warfare. I still communicate with a few old friends in the business, and one concern that has come up is an issue that complicates things considerably for FW groups wanting to play in Null space.

While it would be cool to be able to take the credit for the following, I can't. The issues were raised initially towards the end of CSM9's term by a group of concerned FW citizens and presented to CCP. I know Sugar Kyle has brought this to CCP's attention once or twice over the course of CSMX's term, but there appears to be little traction being made thus far, so it might be time for a spotlight.


Bubbles are a big part of combat in null sec, and for a FW group, deploying bubbles in nullsec can be a tricky endeavor. 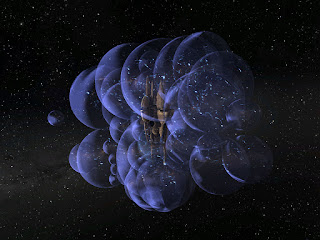 Any member of your own militia that wanders into a bubble you deploy counts as an act of aggression, and comes with a lovely standings hit. That's bad. Worse is if any of those guys lose their pods in the scuffle, because a bad standings hit gets multiplied several times over. Losing a single rank in FW comes with a nasty faction hit to the empire you fly for, one that can't be regained by simply ranking up again. Half a dozen pod kills can net SEVERAL demotions, causing standing hits so severe they can get you, your corp, and even your alliance kicked from FW. Aside from the prospect of losing several billion ISK in implants, this is pretty big on the list of why FW groups often avoid nullsec.

There is some real hope in that there is a relatively easy solution to this problem, and it doesn't even involve making any changes to bubbles.

To put it simply, all that needs to be removed from the game to solve this dilemma is NPC standings hits for aggression in Null Sec and WH space. Of course, that would mean that FW groups could engage "friendlies" at will in null security space and wormholes with no consequences to their standings, but after talking with several people still in FW, no one seems to see this as being an issue. After all, there are no FW objectives in null sec or WH space, just a few good fights, and maybe a chance to try out Fozzie Sov, something that would be very difficult with the way standings hits currently work.