The Return of... FunkyBacon & Friends

At the end of September, the co-hosts and I said goodbye to our regular show on Eve Radio and slipped into retirement after 9 years of weekly live broadcasts. We alluded that we may be back in some form or other at some point, and left it at that.

Behind the scenes I was in talks with the big boys at Gaming Radio Network (GRN, the folk that run Eve Radio and Subspace Radio) about shifting gears to something a little more portable and concentrated; in other words, a podcast. There were many reasons for this, such as all our regular co-hosts being Euro based, and having to stay up until 3am or 4am depending on which time zone they were in, and the fact that almost no one appreciated our odd taste in music. 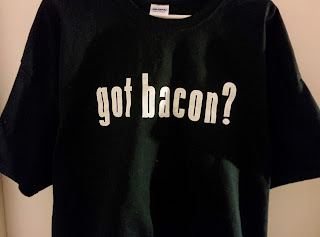 GRN is in the process of some rebranding themselves, so our shift came at a perfect time. Sadly, not everything is done on their end for the new platform, so for now we're still being hosted through Eve Radio.

Without the need for music or live events, or new show can be expected to run between 20 and 40 minutes. Topics will always start with Eve related content, and we'll finish off with any pertinent topics from the larger gaming world (new AAA titles, major MMO updates, sci fi games, maybe a brief review here and there, and should anything be worth picking up in a steam sale, we'll try and mention it). The mix will of course depend on how busy a week Eve is having, and should something earth shattering drop, expect us to crank out a dedicated special for fast release on top of the regular weekly cast.

Our first episode just released today, and you can:

For a first show, it ran a little longer than normal. Now you can put us on a flash stick or your phone and play us in your car, pause us during your fleet op when you need to listen to FC, or really have whatever flexibility you need. We'll be recording sometime during the week, and the show will be released weekly by GRN (or Eve Radio for now) Sunday afternoons 18:00 GMT. If you follow this blog, you'll also see it on here.

It's nice to be back.