Rattlesnake Down - A Story of Tough Love

For those not overly familiar with us, Monkeys with Guns. is a privateer alliance. The difference between a pirate and a privateer is a bit of a fine line. In the old days, governments would issue letters of marque to privately owned ships to seize and destroy the assets of another nation they were at war with. So an English privateer might have a letter of marque to attack French shipping and assets at sea. If his ship was seized and crew taken prisoner, they were entitled to treatment as prisoners of war (as what they were doing was legal in the eyes of law) and couldn't be hanged as pirates. However, should a fat ass Dutch merchantman happen to be sailing by, that same English privateer, just might hoist the Jolly Roger for a bit and take that too... That COULD get one hanged.

Like olde time Privateering, Eve's factional warfare works much the same way, and while we seize and destroy our fair share of enemy assets, we often feel the need to get our yarr on for fun and profit, leaving about 70% of our active membership either blinky red, or well on their way to it.

One corp in our alliance, HEY-H sticks to the legal side of things a little more stringently than most of us. They're small, only 3 active members, and when low sec is slow they enjoy destroying enemy ships attempting to slip through Gallente high sec (surprisingly easy since you can't cloak in enemy high sec). A couple days ago I got this mail from their CEO:

I have been scouting a one man corp tolar biggs Corporation in hi sec. He has two pocos and i watched him bring out a dual tanked 4 stabbed rattlesnake to defend the pocos when out of reinforce after he was war decked by a small corp. He also continued to mine ice in his mack while war decked. Unless anyone has any objections, I would like to pay for the war dec and rid new eden of this dual tanked stabbed obscenity that he is flying, kill his pocos, kill his miner and hear the lamentation of his women.

My first reaction was, "Surely you jest," but then I remembered that this is Eve, and people abuse normally majestic and capable ships with poor fits all the time. Bosknard is also a potent diplomat. He knows that the best way to get a FW privateer seeing the red of rage is to mention the need to kill a ship stabbed up to it's gills. Alliance leadership met for about 3 seconds, and the wardec was approved.

I didn't hold out much hope for an op success. Surely tolar biggs would do a little research, see the size of our alliance, maybe not realize we were mostly pirate and either dock up for the week, or hire some high sec mercs to defend his assets. If that happened, while the alliance itself would remain quite safe (high sec mercs don't seem to like visiting us in our own space for some reason) the 3-man HEY-H corp would likely not accomplish their mission either. I should have remembered one of Eve's oldest sayings: 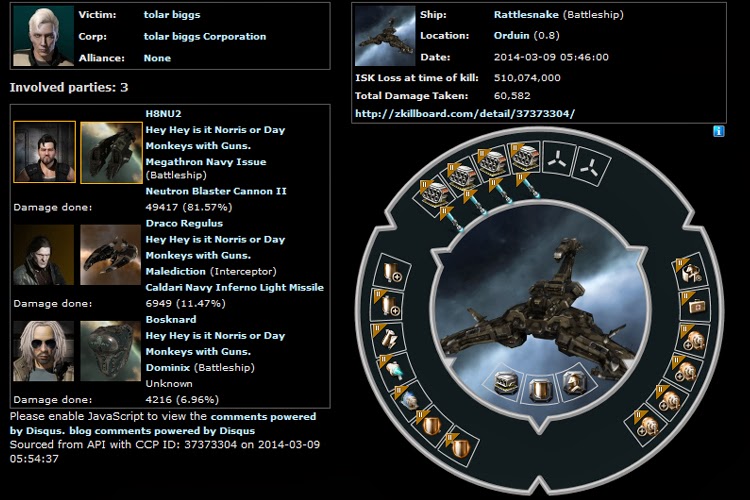 Bosknard and his boys laid their trap, tolar biggs is a creature of habit, and one atrociously fit rattlesnake was successfully euthanized. While it's certainly no 44 billion ISK Navy Raven the work that Bosknard, his corp, and others like them do is no less important. Sometimes a little tough love in Eve can be the most effective teacher.