FW Fits: The Little Tristan that Could (Kill a Dramiel)

The T1 frigate is a staple in Factional Warfare operations. Fast, nimble, versatile, and most importantly, able to enter any type of complex. The downside to frigate piloting is two fold. 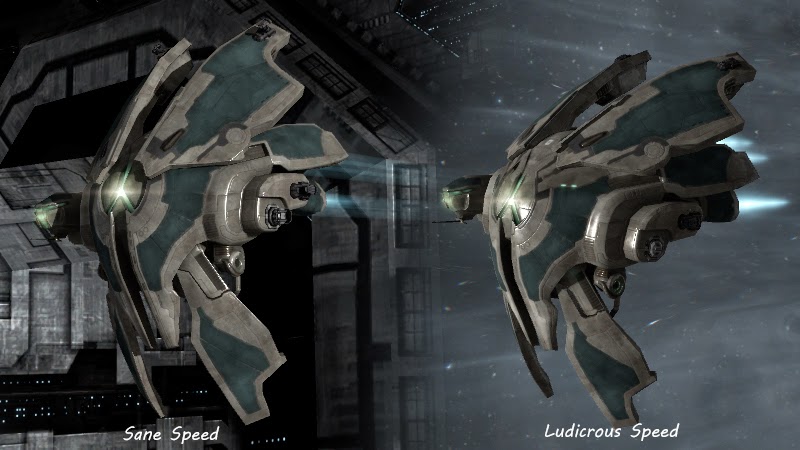 1: People assume frigates are for noobs, and many veteran pilots will steer clear of them 'less their ePeens shrivel and die.
2: There isn't much room for mistakes in a frigate. A general lack of EHP, and lower DPS than most ship classes means a good screw up usually leads to your ship exploding.

With Rubicon 1.3 delivered, the Tristan received a pretty serious graphical update, so it seems a good time to give it a good old fashioned FunkyBacon PVP fit update as well. Before I get into my chosen fit for this little beast, I'd like to first point out 2 observations: 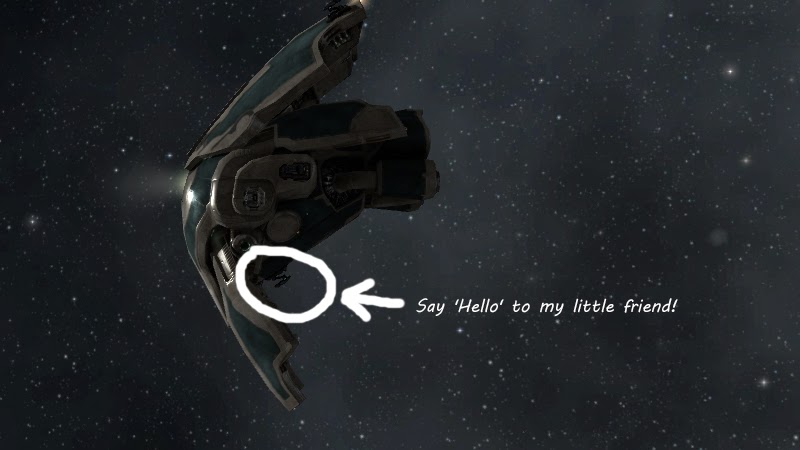 1: The transformer-like plate animation on entering and exiting warp is superbadass.
2: One of the Tristan's hard points was moved to just behind and between it's "legs". When a turret is equipped in this slot, it gives the appearance that the ship is getting a stiffy upon exiting warp. I refuse to believe this is an accident by the art department. Surely they know, right?! A small blaster looks laughably tiny, but go ahead and slap a Gatling pulse laser under there and watch that beast exit warp.

Alright, with that out of the way, let's take a look at some plex frigate PVP basics. I am of 2 philosophies when it comes to plex fighting. Fast and kitey, or in your face tanky. Much like the Algos Fit I talked about last week, this Tristan is of the in your face variety. I notice a lot of people in the war zone go with a kite version of the ship, preferring to let their drones do the talking while they burn out at range and keep their ship out of harm's way. That's also what people expect when warping into you at a plex, and one way to really screw with a PVPer is to do something he doesn't expect you to do. 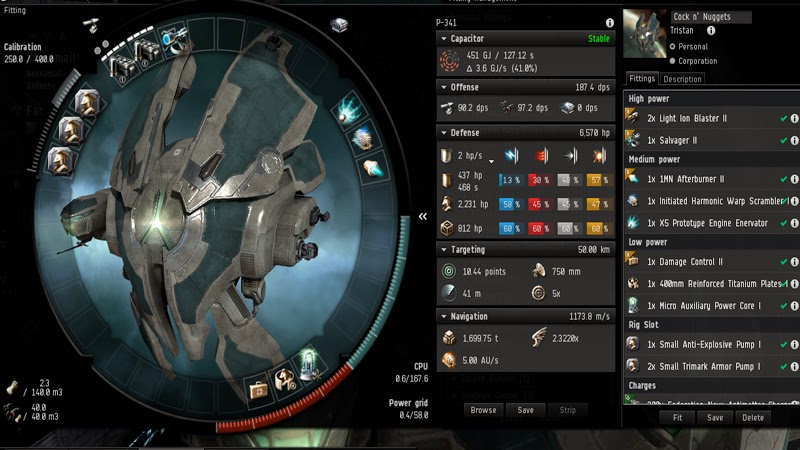 So here's our fitting. It'll run you just shy of 9 million ISK. The graphic takes gun heat into account as well as afterburner heat. Like the algos, you won't need a ton of speed on this thing as you'll be expecting people to warp to you for the most part. One of the great things about heat and afterburners, is that they don't take much damage when compared to a MWD. The cycle times are also longer, and they have no cap penalty. If you do not have good fitting skills and the Genolution CA-1/CA-2 implants, it should fit if you downgrade the guns to Electrons. That'll shorten your range a little, and you'll take a little bit of a hit to your DPS, but rate of fire and tracking will also increase, so there's some give for the takeaway. 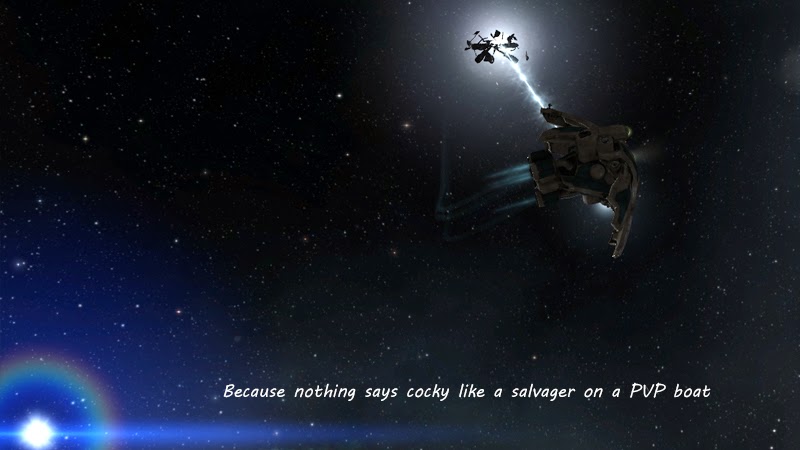 Tactics wise, there are two main ones. Against something small like another frigate, approach and overheat everything. Against anything larger, tight orbit, afterburner on, and hope you can out-track their guns with a high transversal velocity. One special note: have a slightly wider orbit against missile ships, as your top speed is what mitigates incoming damage from missiles, not your transversal. You'll still need to be careful about remaining within your own gun range to the target.

Of course I would not recommend a fit to you guys without some field tests, and I'm pleased to say, this one performed admirably, especially against bad piloting. The first check is how the ship will perform against other T1 frigates.

Merlins are fairly common plex fighters in the war zone. They have nice base resists if your Caldari frigate skill is high, and can put out some decent, though not really earth shattering DPS. I entered the plex with a Merlin already in it. It happened in our home system so I figured he was there to fight. I landed about 20k off of him, and he warped off when I started to burn for him. There were only about 30 seconds left on the timer, so I figured he'd be pissed and want his plex back. He'd been sitting there for a good 19 1/2 minutes for no gain. 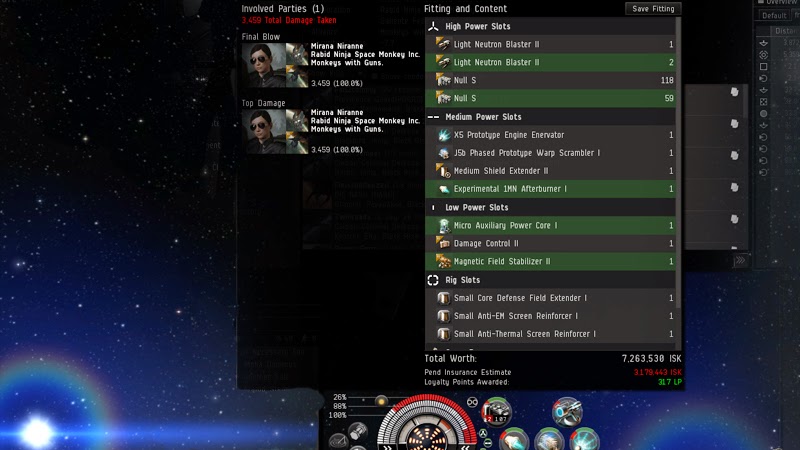 About 2 minutes later, the same merlin showed up on short scans, and 30 seconds after that, he was back in the plex with me. We fought. His fit was meant for mid range, likely around 6-8k, and he was never able to get more than 2k away. He also made the mistake of going for my drones early on, but couldn't track them because Null is a long range blaster ammo and gives turrets a hefty tracking penalty. He would have done better using his navy AM ammo. the result was that I still had 88% armor when he went down.

Had the merlin been packing void ammo and blasting me at point blank, the fight would have been a lot closer, but with an extra 50DPS advantage on my side, I should have won the fight in low armor.

Speaking of people making mistakes though, there was this Dramiel...

I was sitting in a medium complex in Pavanakka, hoping for a decent fight to really put my tristan to the test. I was not to be disappointed. After about 10 minutes, a Dramiel rolled up on short scans. I didn't really like my chances, and 9 times out of 10, a Dramiel should be able to beat a Tristan. The pilot of this Dramiel must have been thinking his chances were more 10 out of 10, and he decided to pay me a visit. 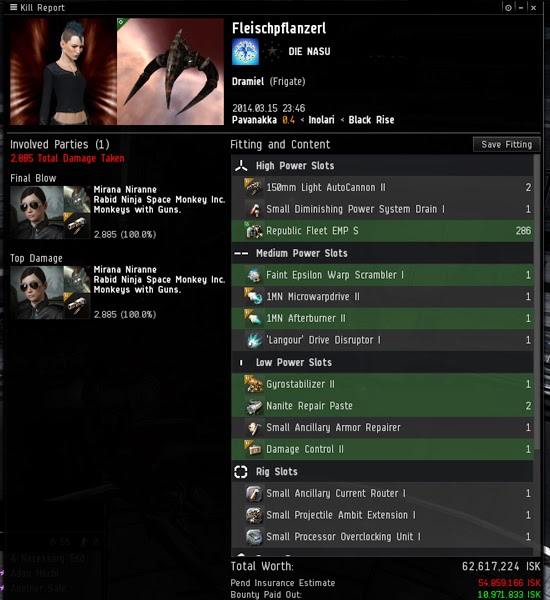 Ok, so let's talk about what happened here. Remember what I said before about most Tristans in the warzone being fit to be kitey? That's likely what this fellow was expecting, and had I been fit for kite, I'd have been D-E-D dead. Unfortunately for him, I wasn't, but he still didn't have to die.

With a dual prop, he should have been able to fly circles around me. He should have had barrage ammo at least on standby. Instead, he almost hardly moved, used EMP ammo against an armor ship, and ran out of cap about halfway through the fight which is why I'm assuming his tackle started to fail and his reps trickled down to almost nothing. At that point, he didn't have enough cap left to even activate his afterburner, he went into structure, and it was too late. The 10 million ISK bounty I got more than paid for my ship. I finished the fight at 23% armor.

Had he had the presence of mind to burn away with his Afterburner, he should have easily been able to get out of my point range and get away at least. Had he had barrage ammo loaded, he could have negated almost half my DPS by maintaining a mid range. We'll chalk this one up to pilot error. I shouldn't have won the fight, but there's always a chance, and BNANA's Fly Fearless mentality dictated I take the fight. In this case, the Tristan came out on top, and I've got a funny kill on my killboard to show for it. 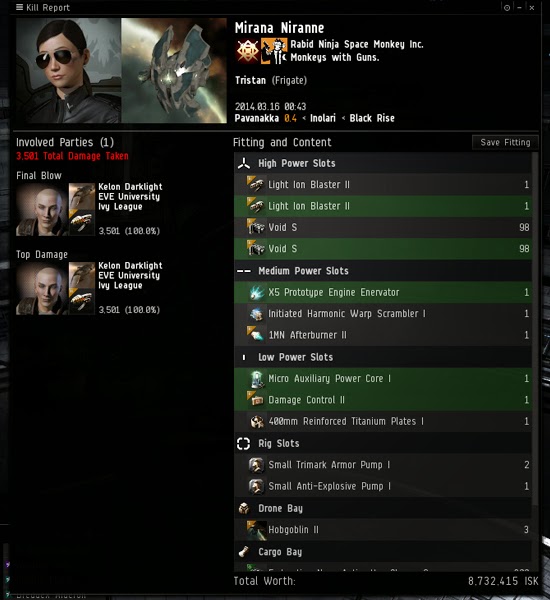 This one doesn't have all that happy of an ending I'm afraid. After killing the Dramiel and hauling his loot back to station, I repaired and returned to Pavanakka. I wanted my 25,000 LP. 8 minutes left on the timer and a Coercer shows up on short. I figured since I had just killed a Dramiel, my chances were probably pretty good against a Coercer. Small pulse lasers, even with a 50% tracking bonus, still don't track AB frigates well at extreme close range, so that was my plan. Unfortunately, I also made the mistake of loading void ammo instead of navy. Like null, void has a tracking penalty. Against a cruiser, no problem, but a destroyer is a bit harder to hit. Hindsight being 20/20, I should have loaded navy.

The Coercer landed in the plex, and managed to get off 3 hits that wrecked my face before I was able to establish a tight orbit. Once I got in tight, he was missing me about half the time, and things were more manageable. He had a good head start on me though, and as tough as my 400mm plate was, he had more HP to chew through. The fight ended with me in a pod, and him with 20% structure. Still a decent showing, and I wasn't ashamed.

With a GF in local I began my warp to nowhere before heading to the gate to jump out. The Coercer pilot gave me a GF as well and linked a pair of AF kills he'd just gotten with his ship. He was surprised our fight was so close as he'd taken those guys on 2v1 and come out with 7% structure at the end. Given that information, I felt the Tristan held up extremely well. Had he landed a little closer to me, and I could have established a tight orbit before getting wrecked 3 times, I might have even won.

Overall, I'd say this Tristan fit is pretty solid. Providing you can get in tackle range (which is most of the time when plex fighting) it's got the balls to hang with just about any frigate, and possibly even a destroyer. With a tight orbit, it should even give some cruisers a hard time. Finally, given that most of the Tristans you'll see in FW lowsec are kite fit, should your enemy be expecting to fight a kite he'll be in for a nasty surprise.

A few minutes ago, I set out with my Tristan for another field test. I'm pleased to say that it's loss against that coercer yesterday has been avenged.

I was running a small complex in null sec border system Mantenault when a Coercer showed up on short. I made sure to load navy rounds this time. As he landed, I heated my afterburner and bullrushed him, hitting orbit 500 just as I got in range. I think he was expecting a kitey Tristan and doesn't read my blog, because he had nothing but T2 ammo loaded that kills the already abysmal tracking of pulse lasers.

As he was hitting low armor, his friend in a MWD condor landed right on top of us. I took a gamble and removed tackle from the coercer that was about to die and went straight for the condor before he could pull range and kite me to death. The gamble paid off, got them both with 2% armor remaining.

I'm officially labeling this Tristan a Badass fit. My only regret is these guys were both able to get their pods out. The only thing that would have made victory sweeter would have been pointing a pod and salvaging his wreck before popping it, especially after I gave them a GF in local and got "no" as a response. Sore losers.